Board’s patron is also a partner 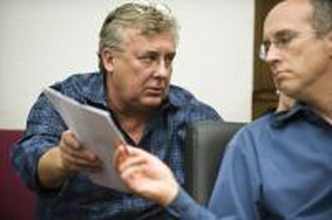 Board’s patron is also a partner

Colorado’s most prolific foreclosure attorney has for years given thousands of dollars to a group representing the public officials charged with impartially overseeing his industry.

Shortly after the money started flowing to the Public Trustees’ Association of Colorado, trustees began awarding lucrative no-bid contracts to a computer software company in which the attorney, Lawrence Castle, holds an interest. That company, Government Technology Systems, has since donated tens of thousands of dollars more to the trustees’ association — $20,000 last year alone — funds used in part to pay for dozens of hotel rooms for trustees attending their convention at a Black Hawk casino in June.

The alliances go even deeper.
Castle has helped the trustees’ association, which they refer to as CPTA, draft proposed changes to foreclosure laws that ultimately impacted his business — sometimes for the better — and several times has testified before the legislature supporting the association’s positions.

In one case, Castle and his law-partner wife, Caren Castle, testified to legislators that the trustees of the state’s 10 largest counties — all of them appointed by the governor — deserved a huge pay raise, which they ultimately received.

Castle, whose law firm, Castle Stawiarski, files more foreclosure cases in Colorado on behalf of banks and other lenders than any other attorney, refused to discuss the story with a Denver Post reporter following a CPTA meeting at the Capitol last week.
“I really have nothing to say,” Castle said as he left the building.

Though the trustees say there is no connection between the payments to their association — which last year amounted to four times the money raised through membership dues — and the no-bid contracts given to GTS, some say ethical questions could be raised by the relationship.

“I’m not so sure his involvement with CPTA is a great idea, and the perception of his being a foreclosure attorney working so closely with us could be a bad one,” Pueblo County public trustee Nick Gradisar said. “The idea is we’re an impartial third party and not in favor of the borrower or the lender.”

The contracts awarded to GTS are to manage a county’s entire foreclosure system, a document- driven process worth millions of dollars to the software company that handles it. GTS is paid $45 for every foreclosure case filed in a county, and totals have reached record numbers in recent years. GTS is contracted to run eight of the state’s 12 biggest counties, where the bulk of the foreclosures are filed.

GTS has one competitor — mTech Services Corp., which is headquartered near Seattle and is contracted in only a handful of counties, including Pueblo.

Other trustees say they see nothing wrong with the arrangement with GTS as long as the software product they get is a good one — and by all accounts it is.

“I was aware GTS was Castle, and I haven’t really tossed and turned over it,” said Richard Gebhardt, Boulder County’s public trustee. “GTS is a stand-alone business, and I’m in the business of it being a useful system that is fair, not who makes the money.”

Processing a big business
The fee paid to GTS — mTech’s fee ranges from $10 to $35 — is ultimately passed on to homeowners as part of their costs of being foreclosed on. They pay it if they cure the mortgage default; otherwise the bank pays.

Among the 12 Colorado counties with the greatest number of foreclosure filings last year — accounting for 85 percent of all the cases statewide — GTS is used in Adams, Arapahoe, Boulder, Broomfield, El Paso, Jefferson, Larimer and Weld.

In all, those counties had 25,732 foreclosure cases filed in 2010 and the Castle law firm filed the majority of them, according to the trustees. At $45 per filing, GTS would have been paid more than $1.15 million.

Some trustees said they haven’t considered a switch to another company because it’s simply too complex a computer process.

“Why not switch? I don’t want to go through the brain damage. It’s just impractical,” said Jefferson County public trustee Margaret Chapman, who inherited the GTS system when she was appointed in 2007.

Some small counties, such as Garfield, use neither mTech nor GTS but rather create their own databases.

The computer system that manages the foreclosure process is big business. A variety of public and corporate filings link the Castle law firm, GTS and other Castle business interests, including CMS Holdings Group LLC, which has attracted at least $54 million in venture capital financing. It’s unclear how large a piece Castle owns of GTS and CMS.

The mTech computer system is called Millennium Default System and is used in 10 states, including Colorado. Company president Aleta Lavandier declined to talk about GTS, though she offered a quick opinion about Castle’s connection to the company.

“I admit that this situation does make it more challenging,” she wrote in an e-mail.

Others said it gives the wrong impression.

“It all looks awfully cozy and certainly a red flag or two,” said attorney John Head, who has represented hundreds of families facing foreclosure. “It appears there’s a vacuum on the side of the homeowners.”

Castle Stawiarski files the most foreclosure cases each year in many large counties, according to figures provided by the trustees. In Arapahoe County, which had 5,500 foreclosures filed in 2010 — the most statewide — Castle accounted for 52 percent. In Denver it was 49 percent. In smaller Park County, Castle accounted for 90 percent of the caseload.

Castle attends nearly all of the trustees’ quarterly meetings, records show, and has helped draft some of the legislation the association has sponsored, laws that not only changed the foreclosure process but in some cases made it easier to accomplish.

He’s often appeared before legislative committees to support bills backed by the CPTA, state records show, including giving an eight- minute speech in 2008 before a Senate committee deliberating whether to increase the salary of Colorado’s 10 appointed trustees from $48,500 to $75,000.

Legislators tempered the raise to $72,500 and phased it in over three years.

Castle and his law firm, which formerly was known as Castle, Meinhold and Stawiarski, also retain the same legislative lobbyist as the trustees’ association — Capitol fixture Margaret “Peg” Ackerman — and is her firm’s highest-paying client, according to documents filed with the Colorado secretary of state.

But Ackerman says she’s not swayed by the dollars.

“We’ve kept it at arm’s length,” Ackerman said, noting that an associate, attorney Thomas Hill, handles Castle while she retains the trustees’ agenda. “If there was ever a conflict, we’d just stay with the trustees since they were our initial client.”

Some trustees said they bristled when they learned of Castle’s connection with Ackerman — but ultimately said nothing.

“I wasn’t happy about that at all,” said Bob Sagel, one of the state’s longest-serving public trustees who is also treasurer in Morgan County. “It just has the potential for an appearance of impropriety.”

Colorado’s foreclosure system, in which public trustees sit between lenders and homeowners and oversee the legal process, is the only one of its kind nationally. Other states rely on private trustees — companies hired by lenders — or use a judicial system in which the courts manage the entire foreclosure procedure.

The reason, several trustees say, is to “ensure a separate and fair” process where lenders and homeowners are equally protected.

Except for Denver and Broomfield, Colorado’s largest counties — Adams, Arapahoe, Boulder, Douglas, El Paso, Jefferson, Larimer, Mesa, Pueblo and Weld — have trustees appointed by the governor and serve renewable four-year terms, a law that dates back to the state’s silver-mining days.

By law, elected treasurers in other counties are also the public trustee, except in Denver, where the post is held by its elected clerk and recorder. Broomfield’s trustee is appointed by the City Council.

Though trustees appointed by the governor are required to make an annual report of their activities, it’s typically limited to their finances and the foreclosure activity they supervised.

Trustees who are the elected treasurer operate differently, serving at the pleasure of voters, but they are required to follow county hiring, budget and bid procedures. Outside audits look at their finances, not their performance.

Though there’s little or no cost to a county to use the software management systems, the contracts have been awarded without bids. Instead, GTS gets a fee each time a foreclosure is filed.

The trustees incorporated their association in 2008 — it had existed informally since the 1940s — in part to have a cohesive group that could muster strength when lobbying the legislature for changes to law.

But there was another benefit.

“Castle and GTS have pretty much been the only cash donors, yes,” said Michelle Miller, treasurer and public trustee of Park County and CPTA treasurer since it was incorporated. “We absolutely could not accept the money individually.”

Over the years, Castle Stawiarski and GTS have donated thousands of dollars to the trustees’ association, nearly $40,000 since July 2009 alone, records show.

In June 2004, as the trustees discussed the merits of electronic document filing — most were using inadequate databases they’d devised — Lawrence Castle made a presentation about proposed changes to foreclosure laws to accommodate the switch, especially the need for electronic bidding at foreclosure sales.

When the trustees agreed to study the issue, Castle volunteered to help with the legal aspects, minutes show.

“I never detected that he had a vicious motive,” former Douglas County public trustee Jack Arrowsmith said in describing Castle’s work with the association.

Sagel, who was CPTA president in 2007, said the trustees have used the contributions from the Castle law firm and GTS to create an education fund to help smaller county trustees get to meetings and training sessions.

“It wouldn’t be easy to get the training without that money,” said Miller, the CPTA treasurer who disbursed the funds. “It helped that you didn’t have to worry about it.”

The money also was used to pay for association legal expenses, as well as conference lodging bills for some trustees, minutes show.

At the 2008 conference in Steamboat Springs, GTS donated $9,000 to the association, which received another $5,000 from Castle Meinhold, minutes show.

Among the items discussed were changes to state laws.

“The (legislative) committee is still working on the fixes to the new foreclosure laws,” Sagel reported. The committee, he said, “will meet on July 28th at the offices of CMS (Castle, Meinhold, Stawiarski)” to discuss the fixes, minutes show.

That meeting was instead held next door at the tony Ritz-Carlton in downtown Denver.

It was hosted by the Castle law firm.